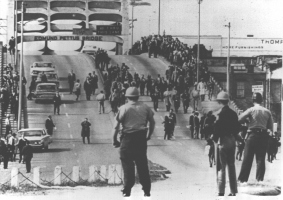 The Selma marches were briefly mentioned in my textbook, I didn’t learn about Bloody Sunday until years later. Those 1965 marches and the violence that followed weren’t part of my school’s curriculum, my classmates and I never saw the civil rights demonstrators being teargassed and beaten. It’s peculiar how history is presented to children, of course, we learned about the passage of the Voting Rights Act but the violence that preceded its passage wasn’t explained to us. I can’t fully blame them; it’s an ugly part of American history and teachers may not have wanted to explain it to their students, I just can’t but wonder how my teacher detailed the Russian Revolution including Bloody Sunday (January 22, 1905) while neglecting our own country’s history.

This post isn’t a searing indictment of the public education system, someone far more important decided that those three Selma Marches (what we know as Bloody Sunday) only warranted a paragraph in a 700 page textbook; besides I went to private school. Why wasn’t it more important? Russian history was extensively covered, we discovered the tsars, the violence of Ivan the Terrible, the revolution and Vladimir Lenin; but what did we lose? Ultimately, our own history was sacrificed. We were focused learning every detail of European history including the minutia necessary to pass exams, the only piece I knew about the Voting Rights Act was the date it was passed and the president who signed the bill into law. I suppose I never thought about its importance or how the law shaped this country. School was certainly meant to be a place of learning but there is an emphasis on maintaining high grade point averages and students have no choice but to focus on subjects they’ll be tested on.

I don’t regret my education, could it have been shaped differently? Absolutely, textbooks and my teachers could have focused on marginalized groups, they could have embraced the past to demonstrate how much has changed. At least I wasn’t willfully ignorant, I was blind because my teachers never told us the whole story. I just didn’t know. How much can anyone learn in February? What can we actually expect our teachers to tell us in one month? Why confine a history that connects everyone to a single month? We can’t fault teachers, there are gaps in the textbooks and we need to fill the holes before those gaps in history are forgotten. Rep. John Lewis, and all of those demonstrators (every race) are fabrics of the past; we should honor them by creating textbooks that fully encompass their experience.

So how exactly did I learn about the Bloody Sunday? I was studying abroad in England, a British professor compared and contrasted the Civil Rights era in the United States vs. the UK revealing the entire story. We covered the murders of Jimmie Lee Jackson and James Reeb as well as the beatings of seventeen civil rights activists. Then we examined how the events in Selma influenced Paul Stephenson in Great Britain; the ripple effect was fascinating, I had never considered the actions of some can change the lives of others.

I have never felt connected to American history or any history; they’ve always been words on paper or events that happen to other people. I’ve heard George Wallace’s Inaugural Address, ‘segregation now, segregation tomorrow, segregation forever’ that phrase became part of a movement but it sounds impractical now. Why would anyone kill to uphold such a foolish ideal? No, I can’t understand it. We heard those words one February, the full context was unexplained by our teacher, instead we were taken to an black arts exhibit. Maybe that was the disconnect, we were shown something inherently disturbing and then distracted by the artwork of Neo-Expressionist painter Jean-Michel Basquiat. 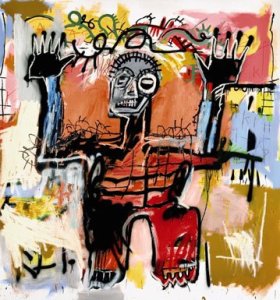 History has always been filtered, cleansed of the ugliness that has been inflicted on others, and then told to schoolchildren. The Stonewall riots were part of that cleansing, my classmates and I didn’t even know they happened. In fact I don’t think the gay liberation movement was mentioned at all. Why were certain events excluded from textbooks altogether? We can’t possibly learn everything but writing gays out of history is problematic. History becomes subjective when left in the hands of revisionists and significant events disappear.