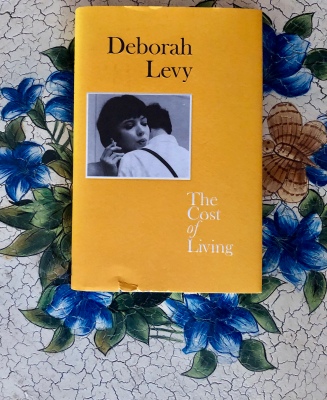 This is my first post of the year and I thought it would be right to review a compelling read. Deborah Levy’s The Cost of Living is the second installment of the author’s living memoir, but it’s also a moving journey of transformation. Levy’s life drastically changes and she must find a way to navigate those choices while writing. The Cost of Living is memorable as it reveals Levy’s adventurous spirit and I was drawn to her story. She buys an e-bike and uses her friend’s shed as a writing space. The Cost of Living explores themes of loss, identity, and mourning with wit and strength.

Themes of strength permeate through each chapter, not just Levy’s strength but the strength of female writers who came before her. Levy writes of Simone de Beauvoir and the life she chose: “Simone de Beauvoir knew that a life without love was a waste of time. Her enduring love for Sartre seems to have been contingent on her living in hotels and not making a home with him, which in the 1950s was more radical than I believe even she realized” (95). There is something rather revolutionary about de Beauvoir embracing her freedom to choose an unconventional relationship. She broke barriers. Levy describes seeing the Chicago home of Nelson Algren as she wanted to see where Simone de Beauvoir’s affair began with the American writer. She writers such an thoughtful account of the couple’s relationship, it’s hard to imagine anyone else describing their doomed love story with such care.

Levy’s writing captures the reader and pulls them into her world. She wrote “All writing is about looking and listening and paying attention to the world. Charlotte Bronte places this kind of looking at the heart of Jane Eyre” (115). Levy’s introspective chapters give the reader details about the writer’s past, she cleverly draws on well known pieces of literature to illustrate her point.

Each chapter is skillfully written. I thought Levy mastered each topic well; for example, the final sentence in “The Republic” set up the new topic in  “Night Wandering.” Levy begins by exploring her mother’s South African homeland in such a unique way— through swimming technique. “She showed me her trick in the murky swimming ponds on Hampstead Heath, floating Ophelia style with ducks and weeds and leaves” (118). The grief and mourning Levy describes is moving. She was grieving the loss of her marriage only to be faced with her mother’s terminal illness, but she eloquently describes her experience.

Deborah Levy never seems to be lost, not truly, even in the beginning of her book, I could sense her rising out of the dark. She is writing through it and the reader knows she’ll reach the other side. There’s a vulnerability to her writing but Levy’s strength is evident:

My mother had made a biro’d X on the front of the postcard and written, X is where I am. She seems to have been located in a neighbourhood somewhere beyond a big flyover, near a telephone tower and a skyscraper. It is this X that touches me most now, her hand holding the biro, pressing it into the postcard, marking where she is so that I can find her” (136).

In one chapter she talks to her deceased mother. It was a mesmerizing chapter, Levy’s  prose is exquisite. Overall I found this book to be empowering. I’m still trying to picture Deborah Levy riding an electric bike through London as she seems rather glamorous. Her “new way of living” is fascinating and I recommend her book.

You can find The Cost of Living here or here.

If you’re partial to fiction her latest novel, The Man Who Saw Everything, releases next month. You can read more about it here.